Production of cooked noodles and extrusion of noodle machine (1)

1. Introduction to the characteristics of cooked noodles, raw materials and accessories 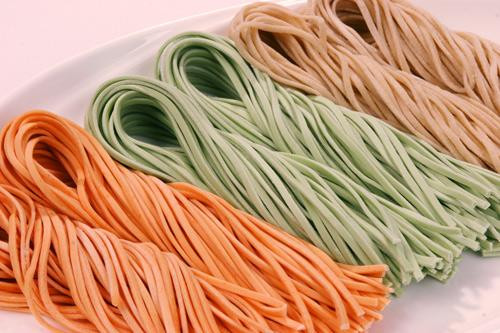 The cooked noodles are extruded micro-expanded foods, and the heating, ripening and extrusion of the noodles are completed in a noodle production line extruder.

The flour is heated and melted into a gel. When it is extruded from the machine head, the pressure is rapidly lowered, and the internal water evaporates, causing a microporous structure inside the product. The mesh structure is used to improve the functional properties such as the taste and nutritional texture of the noodle. , has obvious promoting effect, and has better rehydration, especially the corn noodles are extruded and extruded to eliminate the rough taste of the traditional corn noodles, and have fine and smooth characteristics.

Moreover, due to the action of high temperature and high pressure and partial evaporation of water, the sterilization effect is completed, and the safe storage time of the extrudate is prolonged. The cooked noodles can be prepared from wheat flour, corn flour, rice flour and bean crop flour. The flour should be fresh, non-deteriorating and pest-free, and the flour size must be greater than 80 mesh.

North Korea's cold noodles mostly use wheat flour as the main raw material. After continuous development and improvement, the Korean cold noodles production formula has been different. In addition to wheat flour, the amount of corn flour and buckwheat flour is increasing, which brings cold to the DPRK. Multi-color and multi-variety. North Korea's cold noodles began to spread in the areas of Korean ethnic groups such as Jilin and the Korean peninsula. With the development of the economy and technological progress and the improvement of people's living standards, people's dietary structure is constantly changing, and the diversity of dietary requirements is also increasing. The consumption and production of Korean cold noodles have been extended to the Yangtze River basin.

This fully demonstrates that Korean traditional noodles, a traditional ethnic food, have a broad consumer base and a huge market. It also shows that cooked noodles also have great vitality.

Second, the evolution and development of mature noodle processing technology

The maturing surface processing technology has evolved with the evolution of the technical performance of processing equipment. The early ripe noodles were extruded using a wooden plunger and then boiled in boiling water. Chromium can be said to be an early product of extruded noodles.

The appearance of the hydraulic ram macaroni extruder before and after 19 0 indicates the beginning of mechanized (or semi-mechanized) production of cooked noodles. However, before this, the matured noodles were produced intermittently, with high labor intensity, low efficiency and complicated process.

The single-screw continuous noodle extruder appeared in the 1930s. The machine initially had the functions of shearing and smashing. The processing process had a little heat generation, but this still could not meet the requirements of cooking and ripening of the dough. In the later stage, a cooking extruder was developed abroad, that is, a steam or electric heating interlayer was added to the outside of the single-screw extruder barrel to realize the cooking function of the machine itself. However, this still does not allow the noodles to be fully cooked, and the expansion of the dough cannot be achieved, and the quality of the noodle products is still unsatisfactory.

Previous page:  Advances in research on the health effects of nuts and their oils（4）
Next page:  Production of cooked noodles and extruded puffed pasta machine (2)
All Products Contact Now