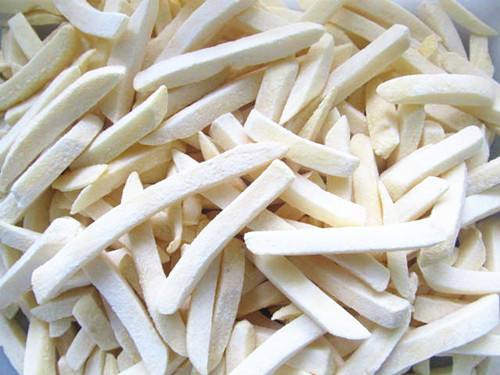 Potato is one of the most important food crops in the world. The annual output of potato is about 330 million tons, and its cultivation range is extensive. The international trade of potatoes is mainly frozen products, mainly fries and chips. In recent years, the world's total export trade of frozen potatoes is more than $3 billion, the main exporters are the Netherlands, Canada, Belgium and the United States. In 2005, 59 U.S. potato products were frozen chips and 41 were exported to Japan and 5 to China. According to our customs statistics, in 2005 China imported about 32,800 tons of American potato products, mainly frozen products. It is estimated that the total output of frozen potato strips around the world is about 8 million T.

According to market survey, about 200 thousand T potato chips are imported products in the domestic consumer market. With the development of McDonald's, KFC, Bogoxin and other fast food industries in China, French fries have been recognized by consumers, especially young people. Market demand has increased rapidly.

At the same time, China's international potato chips also have a large number of market demand. With the improvement of the quality of frozen potato chips and the popularity of related enterprises, the export market in this area will be developed rapidly. In the face of huge consumer groups, while the state spends a lot of foreign exchange importing frozen potato chips to meet the domestic market demand every year, a large number of potato resources in China have not been rationally utilized, resulting in the superior resources do not play a superior economic benefits. Therefore, for domestic superior potato resources, value-added frozen potato chips research. The application is of practical significance.

The potatoes that have been checked and accepted are transported out of the storage system thermostat and sent to the preparation buffer zone through the hydraulic flow channel; sent to the cleaning by the hoist and removed the sediment impurities by the stone removal unit; then sent to the steam peeler and passed through the instantaneous action of 1.2-2.0 MPa steam in the peeler to make the potato skin ripe and flash-steamed. Skin burst, dry peeling machine, cleaning machine to remove the dregs, and then sent to the selection belt inspection, remove the green, rotten and peeling rate of too low materials; after the inspection of potatoes by slicer cut to meet the specifications of potato chips, vibration separator screening to remove unqualified products (short stripes, edges), color sorter to remove black spots with. The unqualified chips are then fed into a two-stage continuous blanching machine by a screw conveyor to ensure that the chips are identical in color and to eliminate enzymes; then the chips are fried by a frying system after sugar regulation, vibration dewatering and pre-drying to increase the chips'fineness, improve the structure and form the skin; the chips are sent to a quick-freezing system after leaching oil, and the frying oil is filtered oil. The system is processed and reused. After cooling and cooling, the French fries enter the frozen tunnel and freeze quickly in the tunnel. After quick freezing, it is graded, measured and packed into cold storage.

Only through the quality control of raw materials and strict quality control in the production process, can the flavor and nutrient components of frozen potatoes be better preserved and the added value of potatoes be increased, and the final product can reach the following quality standards.